In the heart of Egypt in the center of Cairo, just 25 km (15 mi) southwest of Cairo on the western bank of the Nile River lies the majestic necropolis of Abusir. It has been dubbed the house of Osiris and sets just several km north of Saqqara.

Abusir Necropolis is one of the most incredible and poorly recognized destinations in Egypt, it was used as one of the official burial grounds and cemeteries for the elite residents of Memphis the official capital of the old kingdom (2575-2150 BC), and the focus of all the burial rites operating across the capital.

The Aubsir is one of the oldest locations in the history of ancient Egypt, it was inhabited by hunters in the middle Paleolithic and researched a level of importance in the 5th dynasty of the old kingdom of Egypt. There are 14 pyramids within the site that served as the main royal necropolis to the 5th dynasty. These pyramids were much smaller and highly inferior compared to their predecessor and were built with low-quality local stone.

There is also a number of small pyramids like the pyramid of queen Khentkaus II, the incomplete Pyramid of Neferefre & Shepseskaf. There are a massive number of tombs located within the site to high officials and their family members located in close proximity of the king's pyramid and there is also a cemetery of lower-ranking officials from the new kingdom in the north of Saqqara. There is a temple of King Ramses II about 500 m southeast of the pyramids and holds a small hall of 4 columns and a courtyard with 10 limestone columns. 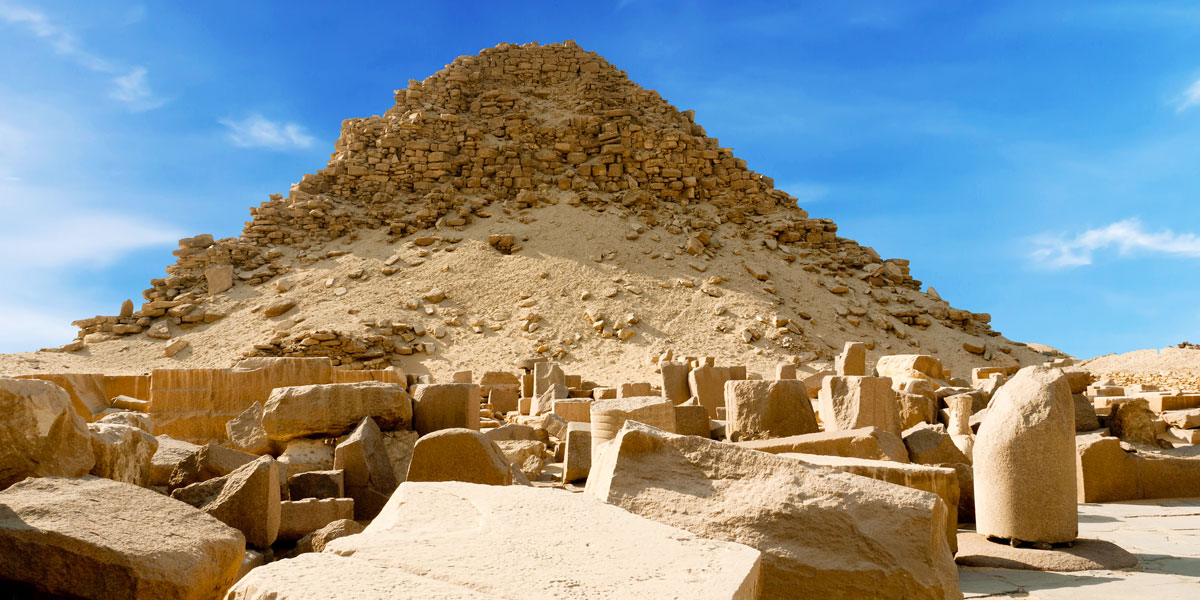 The Necropolis's main attraction has always been its great pyramids such as the pyramids of Sahura's which is considered a milestone in the development of royal tombs. It was built by Pharaoh Sahure of the 5th dynasty and is viewed as the most popular because of its beautiful carved reliefs. It consists of a valley temple, causeway, and mortuary temple.

red granite was used in the construction of the open court and the palm columns and the walls were constructed using limestone that was decorated with enchanting mythical scenes of the ruler battling, hunting, and rising ships. The Neferirkara pyramid was the second one to build Sahure's successor.

The pyramid is known for being transformed from a step to a full pyramid which reached the height of 74 m (225 ft), what makes the pyramid so important is a papyrus archive discovered in the storage room of its mortuary temple dating the times of Pepi II, the papyrus consists of letters, inventories, and rotas for the of the temple.

In the northern corner of the Neferikare lies the pyramid of Newoserre which is highly famous for being the most intact pyramid on the site. Its architectural plan is unusual as the design of the mortuary temple was an l- shape rather than a typical T-shape and the quality of its decorative reliefs are truly mesmerizing. The courtyard of the pyramid is adorned with papyrus-form columns of red granite.

Travel the World - Travel to Egypt

There are countless hidden attractions in Egypt that stand as living proof of the greatness of the ancient Egyptian civilization so don't miss the chance to explore this wonderland through our Egypt travel holiday packages from the UK.