Who is King Khufu?

King Khufu is considered one of the most important kings who ruled Egypt during the ancient Egyptian period. He ruled Egypt from 2589 B.C to 2566 B.C during the old kingdom of Egypt (2686-2150 BC). He was the son of king Seneferu and Queen Hetepheres, and succeeded his father on the throne of Egypt, and became the second king of the 4th dynasty. He married two queens by the name of Merities & Henutsen and had nine sons and fifteen daughters.

King Khufu was known in Greek as king Cheops who is regarded as one of the most important monarchs in ancient Egyptian history as he was responsible for creating the great pyramid of Giza one of the seven wonders of the world and the true motto of ancient Egypt. His full name was Khnum-Khufu which means Khnum Protects Me  As Khnum was the ancient Egyptian ram-headed deity of procreation, water, and fertility. King Khufu "Cheops" has no status at all except for a small statue 7.5 c.m. displayed at the Egyptian museum which was later moved to the Grand Egyptian museum which is made out of ivory that was discovered in Abydos city. 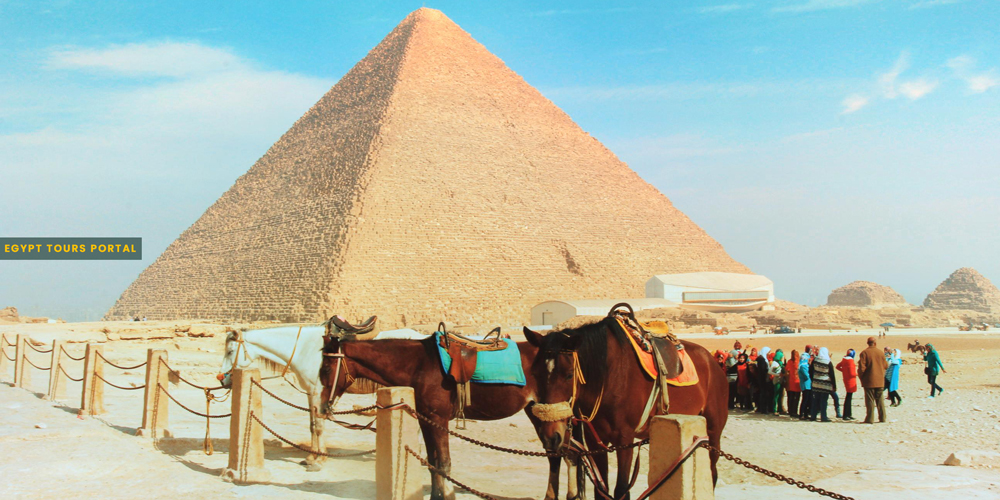 1. The Great Pyramid of Giza

The Great Pyramid of Giza was built in 20 years between 2580 and 2560 BC which stood 480 ft "146.7 m" tall. It was designed by Hemiunu with the usage of 2.3 million limestones each weighing 25 tons and more than 100,000 workforces in changing shifts. It remained the tallest man-made structure in the entire world for nearly 4,000 years. King Khufu believed the Great Pyramid was his stairway to heaven where he would join his rightful place with the gods. The Great Pyramid was the first of its kind as the sides were smooth, as opposed to having steps plus the sides perfectly corresponded to the cardinal points of a compass. King Khufu believed the Great Pyramid was his own gate to paradise as it held his own tomb in the king's chamber.  The accurate architectural design of the pyramid on both the exterior and interior remains a true mystery that attracts people from all over the world until our current day.

The solar boat of King Khufu is the most unique artifact not only in Egypt but in the entire world. It's one of the oldest, largest, and best-preserved monuments in history as it dates back to more than 4.500 years.  It is identified as the world's oldest intact ship which has been described as a masterpiece of woodcraft that could sail today if put into water. The boat is able to showcase the advanced navigation & craftsmen's skills and technology of the era. The purpose of the boat was to sail king Khufu through the afterlife across the galaxy all the way to heaven. The boat was one of two discovered in 1954 which was built with a flat bottom composed of several planks that were reconstructed from 1,224 pieces. It is now located at the Grand Egyptian Museum.

If you prefer to visit the Great Pyramid of King Khufu or many archaeological sites in Egypt, then you can visit our Egypt holiday packages and choose your favorite trip to The Land of Pharaohs.