If you fancy traveling to your dream destinations and exploring the reem vibes of paradise then our 10 days Egypt recreational holiday is a wish that came true. Every brit traveler will experience the highest levels of tranquility, peace, and excitement among the most enchanting destinations in Egypt. You will cast your eyes on the great attractions of Cairo & Luxor that dates back to more than four thousand years and witness a natural heavenly miracle in the city resort of the Red Sea Hurghada where the adventure & party never stops. During those ten days, you will feel the true joy and bliss of life through fully embracing and enjoying this holiday tour by booking us as soon as possible.

Your magical Egypt holiday will begin when you arrive at Cairo airport as our "Egypt Tours Portal" employee will be at your presence to assist you in completing all of your passport control formalities and all the luggage identification & carry, afterward, you will be transported by a private air-conditioned car to your 5* hotel reservation for checking-in. During the evening, you will board a Dinner cruise on the majestic river Nile where you will witness a memorable colorful belly dancing show with a folklore band featuring a hypnotic Tannoura spin in keeping with Egypt's whirling dervishes tradition, then you will return to your hotel for the overnight.

On Day two of your 10 days Egypt trip, you will first enjoy your breakfast then explore the primal footprints of the ancient Egyptian civilization at Giza pyramids complex which the greatest wonders in history.

It is where the spirit of Ancient Egypt was stored for more than 4000 years. The Giza complex consists of the three main great pyramids, six little pyramids, the great sphinx and the valley temple.

One of the most known monuments on the plant as it is the last intact structure of the Seven Wonders of the Ancient World. Khufu pyramid was constructed in 2580 BC in 20 years using 2,300,000 blocks of limestone each weighing 2.5 tons with a workforce of about 100,000 free skilled workers. It possesses the height of 147 m (481 ft) which made it the tallest building in history for 3800 years until the construction of the Lincoln cathedral of England in 1311. Its brilliant design, advanced complex interior, and mysterious origin have always been one of history's greatest mysteries.

This marvelous statue Stood guard for eternity under the name "Hor-Em-Akhet" which means "Horus of the horizon" but now known as Abu Al-Hawl which means The Father of Terror in Arabic. The sphinx has the height of 73 m (240 ft), the width of 19 m (66 ft) and the shape of a mythical creature called the sphinx that possesses the body of a lion and the head of a man believed to be king Khafre to highlights his power and wisdom.

Then move with your tour guide to enjoy your lunch, then complete your trip by visiting:

Is where the journey began, it was the first official capital of Ancient Egypt founded by King Menes in 2925 BC to lead the newly unified country to a new age. It is known as the land of art, & craftsmen and was under the protection of the god Ptah the patron of creation and artwork. It contained the great temple of Hut-Ka-Ptah which means Enclosure of the Ka of Ptah which was translated in Greek to Ai-Gy-Ptos which is the etymological origin for Egypt.

It was a gift from the heavens that launched the golden age of pyramids constructions in ancient Egypt. It was designed by the genius Imhotep the vizier of Pharaoh Djoser to have a one of kind design made up of six steps reaching the height of 62 m and surrounded by a great complex containing amazing ceremonial structures.

At the end of the day, you will return back to your hotel in Cairo for overnight.

In your third day, enjoy your breakfast at the hotel, then check out and transfer to Cairo airport to catch the flight to Luxor to cast your eyes on holy timeless allure such as:

It is a gigantic ancient architecture like any other. It was known as Ipet-isu The Most Selected of Places and Pr-Imn House Of Amon when it was constructed more than 4000 years. For more than 1500 years, it has been one of the biggest religious man-made constructions on the plant and the worship center to various deities like Osiris, Ptah, and Isis but was dedicated primarily to the Theban triad which consisted of Amun with his wife the Goddess of Justice Mut and his son the moon god Khnsou.

After that, head with your tour guide to have your delicious lunch in a local restaurant in Luxor, then move to check-in at your hotel to refresh yourself then head to:

It is a moonflower in the heart of Luxor's desert that gets illuminates by the magical rays of the moon and showcases all of its hidden mysteries and beauty. It was built in the 1400 BCE during the reign of Pharaoh Amenhotep III and was known as "Ipetresyet" which means The Southern Sanctuary . It was mainly dedicated to the God Amun of the Theban Triad which symbolizes the rejuvenation of kingship. The temple's design is magnificently filled with pillars and extensive decorations that become more & more enchanting and captivating at night.

At the end of the day, we will transfer you back to your hotel for overnight.

In day four of your Egypt itinerary 10 days, have your breakfast, then move with your tour guide to behold the greatest monuments of Luxor west bank such as:

It is an inner dimension to the heavens used by the greatest kings and queens of Egypt new kingdom (1570-1070 BC). The valley contains 63 tombs filled with extraordinary treasures, artifacts, statues, enchanting decorations, and of course the remains of pharaohs such as Rameses the great, Amenhotep I, Hatshepsut, and Tutankhamun which is the most visited tomb alongside the tomb of Ramses the Great. The Valley of the Kings became a World Heritage Sites of the UNESCO in 1979.

Hatshepsut temple a.k.a Djoser-Djeseru "Holy of Holies" is a symbol of feminism, beauty and might to the most successful rulers in the history of ancient Egypt Queen Hatshepsut dating back to 1479 BC. It was dedicated to the creator god Amun and to honor the immortal legacy of Hatshepsut. The design of the temple is hypnotically brilliant based on the style of Classical Architecture of the new kingdom.

Enjoy your lunch and complete your tour with a special visit to:

They are two colossal blocks of quartzite sandstone standing at the height of 18 m (60ft) weighing 720 tons each resembling Pharaoh Amenhotep III(1386-1350). The colossi were destroyed by a large earthquake in 27 BC and was reconstructed in 199 AD. The statues became very popular during the Greco-Roman period because of The Vocal Memnon phenomenal.

At the end of the day, transfer to your hotel for overnight.

In day five of your 10 days recreational trip to Egypt, have your breakfast and check-out from the hotel in Luxor then, we will transfer you to the marvelous Red Sea resort city of Hurghada then check into your 5* hotel reservation.

On day six, you will have a free day to do whatever you want, explore this entire resort to the fullest, and have your personal adventure.

In your seventh day, the chance to snorkel in the magical waters of Hurghada to fully explore the marine miracles of the Red Sea and witness the heavenly underwater ecosystem filled with beautiful sea creatures and amazing coral reefs.

In the eighth day of your 10 days Egypt itinerary, have your breakfast at the hotel then, you will head to the heart of Hurghada's desert by a quad car or a camel ride to explore the enchanting landscapes of Sahara and the amazing Bedouin culture, taste the native delicious cuisines and drinks under the phenomenal starry sky of Hurghada. You will then go back to your hotel in Hurghada for overnight.

In The Ninth Day, you will have your breakfast then check-out from your hotel in Hurghada and transfer to Hurghada Airport to fly to Cairo to explore the wonders of old Cairo such as:

It is a magical reservoir containing artifacts in the museum dating to more than 4000 years across ancient Egyptian history. Within the two floors of the museum exists over 150,000 genuine rare artifacts made from extravagant materials like gold, silver & precious gems and ordinary ones such as wood or stone found in the form of statues and funerary objects, plus a number of displayed mummies located within the museum.

The Hanging Church is the core of the Coptic heritage in Cairo which served as the resident for the Coptic patriarch for many years. It was built on the southern wall of a Roman fortress called Babylon in the 5th century AD when the holy family searched for shelter. The church is 30 ft long and the exterior and the interior of the hanging church are truly majestic fusing elements from the 7th to the 13th-century artistic design.

You will then enjoy your lunch before heading to:

Amr Ibn El Aas Mosque is one of Egypt's most significant & prominent Islamic landmarks which was constructed in 641 AD and remains an active house of worship. It was reconstructed various times throughout history which made it act as a living art gallery of the Islamic architecture progress over the centuries.

It's a special tourist attraction dating back to the 19th century. It acted as a church before being transformed into a synagogue in 882 AD. The synagogue remained in a very good condition containing majestic Jewish designs and decorations. The place used to be the capital of Jewish worship for many years until the 1950s.

The golden brick road of the Middle East was constructed in 970 AD and remains an active bazaar and holds everything a traveler could imagine in its magical markets and shops plus a number of vintage cafes that reflect the vintage beauty and prestige of ancient Islamic culture. The whole street contains artistic Islamic architecture and decorations.

You will then return to the hotel for the overnight.

On your final day, you will enjoy your last breakfast in Egypt then head to Cairo airport so you can return home safely with the finest memories. P.S. You can share your thoughts about adding or removing any part from your tour itinerary to be able to accommodate your requirements and fulfill your needs.

Related Tours
Note: If you didn’t find what you are looking for, then you can check our Egypt Tour Packages and choose your trip. 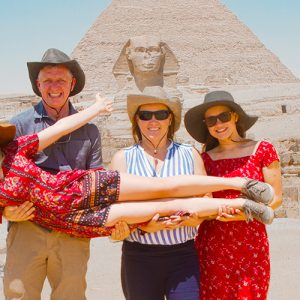 Enjoy 15 days exceptional trip package in Egypt and discover all the best attractions around Egypt beside... 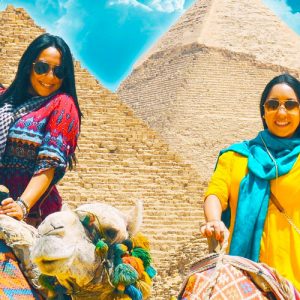 14 Days Trip to the Best of Egypt

Live the true adventure through our 14 days trip to the best of Egypt and discover the most attractive pl... 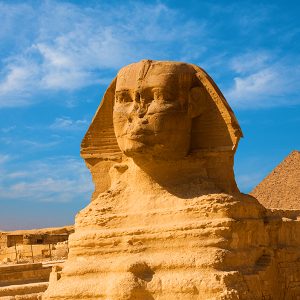 Enjoy exceptional adventure for 13 Days overland trip Package in Egypt to cover the most beautiful destin... 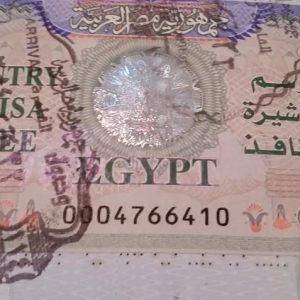 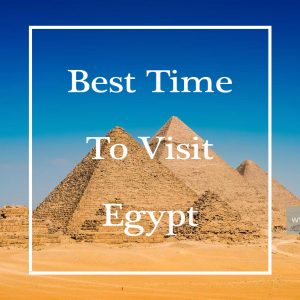 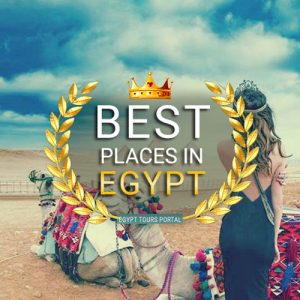 Best Places to Visit in Egypt 2021

Tailor-Made Your Own Egypt Tour Packages

Start customizing your Egypt Tour Packages with one of our expert tour operators who can add or change whatever you want from your tour itinerary to satisfy all of your needs.